... corrupted and impure but with a directness and emotional value to say the least.

Thank you Georges Tonla Briquet and Jazzenzo Jazzmagazine for the beautiful review of our debut EP 3'Ain.

′′Accordionist Piet Maris has been the ambassador of Brussels for several decades. In a colourful and above all well-considered way he depicts life in the sultry Belgian (and European) capital with groups such as Jaune Toujours (his showpiece), Mec Yek, Far Fare and even the children's performance Ik en den Theo/Moi et le Théo. His latest outlet is trio 3'Ain which he forms with trumpeter Yamen Martini and double bass player Otto Kint.

For Piet Maris there is no life without Brussels. He has lived and worked there for twenty-five years. However, it is not an unconditional love bond between the two. He is well aware that the many advantages of a multicultural society also have some negative sides. With Jaune Toujours he incorporates all these facets in an explicit way in his lyrics. The music of this group and all other initiatives are a reflection of the various cultures present. For 3'Ain he shifted his field of action to Ostend, the current home of the Syrian trumpeter Yamen Martini.

Describing the debut disc '3'Ain' (the eighteenth letter of the Arabic alphabet) as crossover would be an easy solution without putting everything into context. For the five compositions, the trio borrowed style elements and motifs from both Western and Eastern circles. A subtle cocktail of merges, as jazz can be. With accordion, trumpet and double bass they tentatively test a (limited) number of possibilities. Swing is missing, improvisation and blues on the other hand partly determine the main colour but following to the Maris method. And that means corrupted and impure but with a directness and emotional value to say the least.

Remarkable are the moments of intriguing stillness as in 'BZ-189' with accompanying clip. Also with the tristesse and melancholy of the other songs you get a feeling of desolation and powerlessness, remembering the background stories of Yamen Martini. Fortunately there is also some room for optimism and positive philosophizing, albeit to a limited extent.

Almost every note evokes an image in itself. All very stylized like the soundtracks of the Greek Eleni Karaindrou for the films of Theo Angelopoulos. Music without excessive decibels or hip electronic effects but with a sincere gut feeling. Take a look at the website of Choux de Bruxelles, the collective around Piet Maris." 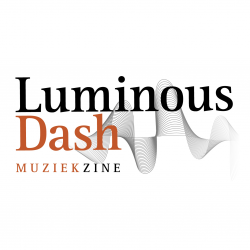 This makes for a very interesting first EP, definitely worth checking out live

Nicolas Van Belle wrote a very nice 3'Ain review for Luminous Dash Musiczine.
Check out his review (in Dutch) on their website.

3'Ain newsflash at Musiczine.net.
Check it out here!

Big thanks to Concert Monkey for featuring the new 3'Ain EP!
Check out concertmonkey.be to read their feature.

You may be pleasantly surprised!

The highly influential Jazz blog 'Bebop Spoken Here' honoured us with the first 3'Ain review from the UK.
Have a look at their website! 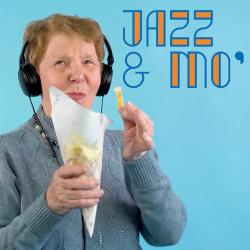 Of the best that came from Ostend since Sexual Healing

"Anyone who has listened to Khaltoum by Ibrahim Maalouf in a loop by now, will surely enjoy the Middle Eastern jazz of 3'Ain. For what a pleasure it is to hear the Syrian trumpeter Yamen Martini!
In 2015 he arrived in Belgium and there he quickly crossed the path of Piet Maris. Since then, the two have worked together several times and when the opportunity arose for a residency in the Ostend arts workshop O.666, they immediately drummed up Otto Kint.
The result is an EP full of atmosphere.

Inspired by the view of the harbour, the opening song, originally written for a short film, gets a firm dose of sailor's grief. And also other songs are often drawn by what the Portuguese call so beautifully saudade.
The boats after which songs like Njord Puffin are named, you can almost hear them creaking and you can see them sailing towards the wide sea - giving and taking.

Thanks to a flawless recording, we get all the subtleties of the interplay of this trio: the full bass sound of Kint, the swelling and dying movements of Maris, the copper breath of Martini. How the latter pierces the silence, at times even reminds us of Soleá by Miles Davis, to name a big shot.

Of the best that came from Ostend since Sexual Healing."

Read the review (in Dutch) on the Jazz&Mo' website 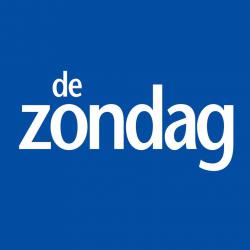 Some advice by our singer & accordion player Piet Maris for a nice Sunday in his beloved Brussels.
In the latest edition of De Zondag.

Discover his tips (in Dutch) by clicking the link on the right. 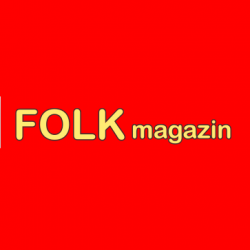 The entertaining music is full of vitality and dynamism, propulsive, lively, and despite some twisted time signatures, as in "Refugees Welcome" (7/8), always dancing, the feet never want to remain motionless, the body swings all the time.

Nothing better to start the week then an enthousiast review:

The entertaining music is full of vitality and dynamism, propulsive, lively, and despite some twisted time signatures, as in "Refugees Welcome" (7/8),  always dancing, the feet never want to remain motionless, the body swings all the time.

Their lyrics, written in a wild mixture of English, Dutch and French, are intelligent, poetic and demonstrate a sincere social commitment.

The crazy horns, crisp grooves and unbounded enthusiasm by the six first-class musicians are fun, the mix of punchy acoustic music somewhere between ska, polka and Balkans-Brass with peppered lyrics ignites from the first song.

"Europeana'' is a great album. 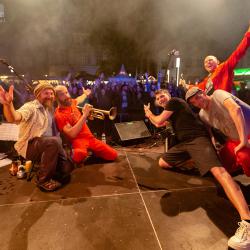 Michaela Reh wrote a small review for Boyens Medien about the Frequenzen-Festival in Meldorf (Germany) where Jaune Toujours made young and old shake their tailfeathers.

Read her full review (in German) by clicking the link to the right.

Seelenfänger made some nice pictures, check them out below!

Jaune Toujours has been featured in the May/June issue of RnR Magazine!
Robb Johnson had a short talk with singer Piet Maris about Jaune Toujours' latest EUROPEANA.

Read the full interview here or by clicking the link in the right column!